With the one-year anniversary of the coronavirus pandemic behind us, I have provided some thoughts and perspective on the last twelve months and where we may be heading.

The best place to begin is to look back on where we were twelve months ago.  As the coronavirus pandemic unfolded and spread rapidly throughout the world, we have endured the worst global pandemic since the Spanish Flu of 1918-1920.  With nearly 120 million people having been infected by the Coronavirus, more than 2.7 million people are reported to have died as a result of COVAID.  Arguably, the death toll could have been worse if governments had not imposed draconian measures to contain the spreading of the virus by enforcing social distancing and restricting domestic and international travel.  Inevitably, however, these measures led to the shutdown of large parts of the economy and, as a result, the deepest recession in modern history, dwarfing the Great Recession during the Global Financial Crisis by a wide margin.

At the outset of the pandemic, it was natural to fear that the world economy would stay in the doldrums for years to come.  With a little over twelve months in the rear-view mirror, I am pleased to say America is defying such pessimism.  Our great nation has outrun the gloomy growth forecasts from last summer, adding fiscal rocket fuel to an already fiery economic policy mix.  President Biden’s $1.9 trillion stimulus bill takes to nearly $3 trillion the amount of pandemic-related spending passed since December, and to about $ 6 trillion the total paid out since the start of the crisis.  On current plans the Federal Reserve and Treasury will also contribute another $2.5 trillion into the banking system this year with interest rates projected to remain near zero.  For a decade after the global financial crisis of 2007-2009 America’s economic policymakers were overly timid.  Today our policymakers could not be more aggressive.

The probable result is a bounce-back that was unthinkable in the spring of 2020.  As of January, America’s retail sales were already 7.4% higher than a year earlier, as most Americans received $600 stimulus checks from the government, as part of the previous round of stimulus.  With consumers homebound and unable to spend as much as they normally would in restaurants, bars and cinemas, consumers have accumulated over $1.6 trillion in excess savings during this past year.  If vaccines continue to reach arms and America avoids a nasty encounter with new variants, the unemployment rate should fall comfortably below 5% by year-end.

This good news is not confined to America.  Manufacturing surveys are healthier even across the Euro Zone, which is behind on vaccinations, battling new variants and applying less stimulus.  President Biden’s spending is expected to further boost global demand for goods and services.  America’s trade deficit is already more than 50% greater than before the pandemic as the economy continues to increase its imports. The OECD has forecasted that America’s economy will, unique among large economies, be larger at the end of 2022 than it had predicted before the pandemic.  From April to September of this year America is likely to outgrow China, which is tightening monetary policy and has suffered a 9% decline in its stock market since mid-February.

From a private markets perspective, global private equity has shown remarkable resilience during the pandemic.  Following a short period of extreme uncertainty, investment activity has picked-up as General Partners have sought attractive opportunities amid continued market dislocations.  Exit conditions have materially improved allowing fund managers to accelerate divestments through sales to strategic buyers, sales to other buyout funds (i.e., secondary buyouts) and initial public offerings. In turn, Limited Partners have continued to pursue a robust commitment strategy providing for appropriate portfolio diversification.  From a performance perspective, reported returns have recovered strongly from a significant downward adjustment in valuations at the beginning of the year.

Global M&A activity rebounded, gaining substantial momentum in the fourth quarter of 2020 as liquidity improved and the economic outlook brightened.  Between October and December 2020, announced transactions totaled almost $1.3 trillion.  This amount implied a 13% increase in deal volume relative to the previous quarter, making Q4 the most active quarter in six years.  Full year global M&A volume totaled $3.5 trillion, although lower than the previous year, was nevertheless remarkable considering the sharp contraction in deal activity in the first half of 2020.

Financial sponsors contributed meaningfully to the year-end M&A activity.  In Q4, Global LBO volume surged to over $120 billion, the largest quarterly amount since the peak of the buyout boom in 2007.  The U.S. market proved particularly dynamic, after the pandemic had dried up deal activity almost completely during Q2 2020.  Deal activity also gained substantial momentum in Europe and in Asia.  In the United States, the largest LBO during Q4 was Thomas Bravo’s acquisition of Real Page ($10.1 billion), followed by Stonepeak Partners acquisition of Astound Broadband ($8.1 billion) and Platinum Equity’s buyout of Ingram Micro ($7.2 billion). TDR’s acquisition of Asda Group ($8.8 billion) and Blackstone’s buyout of Signature Aviation ($6.8 billion) represented the largest transactions in Europe.  AMP’s announced acquisition by Ares Capital for $4.5 billion led the rankings in Asia.  Overall, with buyout activity ending 2020 on a very strong note, annual volume totaled $296 billion, virtually unchanged from the previous year (Table 1).

Technology oriented deals remained the most important focus of buyout firms in Q4 2020.  In 2020, 26% of LBO’s worldwide involved a company operating in the computer and electronics industries, following a trend that has been underway for the past five years.  In the United States, the share of technology deals was even higher, accounting for almost 44% of total deal volume.  This trend is broadly consistent with a rising share of information technology in public market indexes, reflecting a growing number of technology companies as constituents and rising valuations.  At the end of 2020, the information technology sector had a weight of 28% in the S&P 500, up from approximately 20% in 2015.

In public markets, the recovery in equity indexes have been led by technology stocks.  Valuations of technology companies, especially in the United States, have generally increased more than the broader market.  This has been especially the case during the pandemic when many technology companies have benefited from lockdowns of large parts of the economy.  Amazon, for example, has been one of the biggest beneficiaries whose stock price rose 73% in 2020.

In private markets, average purchase price multiples remain close to their peak (United States) or even increased (Europe) in 2020.  However, as in public markets average entry prices mask a substantial degree of variance across sectors and individual transactions.  Growth-stage technology companies, which have become a key target of buyout funds, tend to trade at a much higher multiple of earnings than the traditional private equity target.  As a result, technology deals have a meaningful impact on the market-wide average purchase price multiple.  Thus, even if pricing stays the same for most businesses, a higher proportion of buyouts taking place in technology sectors should boost the proportion of deals taking place in this pricier range.  According to Pitchbook, approximately 20% of LBOs in the United States in 2020 had entry multiples of 20x or more.    Adding acquisitions by financial sponsors that were priced at 16x or higher, raises the share of LBOs with substantially-above average multiples to roughly 35%.

It remains to be seen to what extent the expected lifting of containment measures in 2021 and the rebound of economic growth in a wider range of sectors will result in multiple compression in tech companies.  But even if this happens, the normalization of economic activity could result in higher multiples in non-technology sectors, with average entry multiples remaining at their current elevated level or rising further. 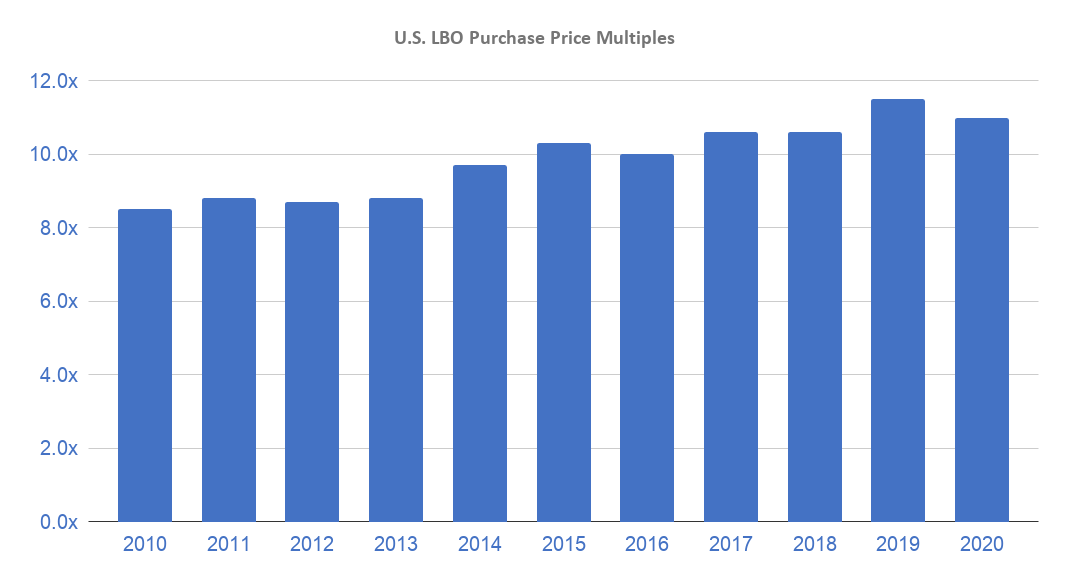 While we generally share the current sense of optimism for 2021, we are cautious that remaining uncertainties have a particular weight in an environment where risk assets are richly priced. As a result, investors should be prepared for renewed periods of market volatility, which is not necessarily bad news for patient investors. For private equity investors, who can look through temporary market turbulence, dislocations in public and private markets could bring about attractive investment opportunities as entry prices adjust downward in risk-off periods. However, portfolio diversification across strategies, geographies, and vintage years will remain as important as ever to gain on the upside, while mitigating downside risk.